RENT A SCOOTER WITH GPS IN 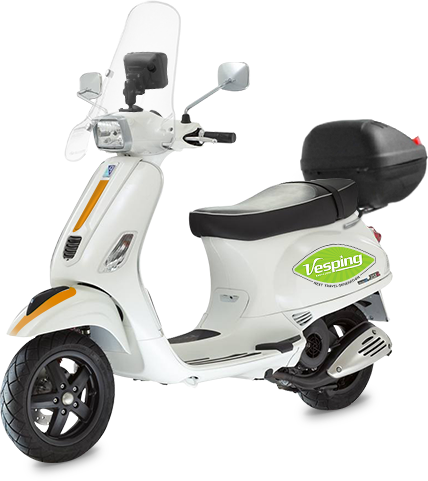 Vesping is the new travel concept: rent a Scooter in Barcelona and with a simple GPS Satellite Navigator you can plan your trip and visit all the spots you want! Our Barcelona GPS tours allow you to discover the hidden gems of one of the most beloved cities in the world ... without getting lost on the road! Reach the Sagrada Familia through hidden, picturesque city streets unknown to the average tourist, or traveling from the modern architecture of the city to the beach. Discover below the GPS guided tours you can take on the back of a Vespa, for a unique and amazing experience.
Start planning your Self Guided Tour in Barcelona and feel free to go wherever you want whenever you want. Hire a Scooter in Barcelona now!

The year 1992 was an important and decisive one for Barcelona. The city opened its horizons thanks to the Olympic Games, becoming the center of attention not only in the Mediterranean, but throughout the entire world. The Port Olimpic still reminds visitors of the grandeur of the event, but our guided tour does not stop there, because from that point, the city will change its appearance, and will transform itself at lightening speed. Hiring a scooter in Barcelona you’ll disover all these transformations: streets, colors, beaches, services. With this GPS tour in Barcelona you will be enchanted by the City of Counts, its monuments, its quarters and, above all, by the contrast between the old city and its modernism, all while riding your Vespa. 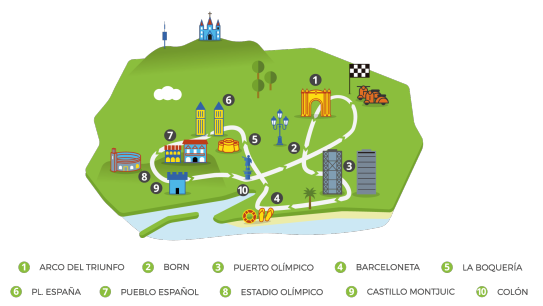 Antoni Gaudi’ is the personification of Barcelona. His genius lives on today through the legacy he has given to the Catalan city, one you can truly discover visiting Barcelona by renting a scooter. Our GPS Gaudì Tour is dedicated to the artist who, with his creations of rounded shapes and colored mosaics, has given to the city an incredible harmony, making it unique and special. From the Sagrada Familia to Park Guell, with your marvelous Barcelona Guided Tour you’ll save money and also discover the architecture and buildings devised by the genius Antoni Gaudi’. Don’t waste time: let’s embark on this GPS trip! This is our most artistic tour, that at the same time will also show you the playful aspect of life, through masterpieces capable of surprising each generation. 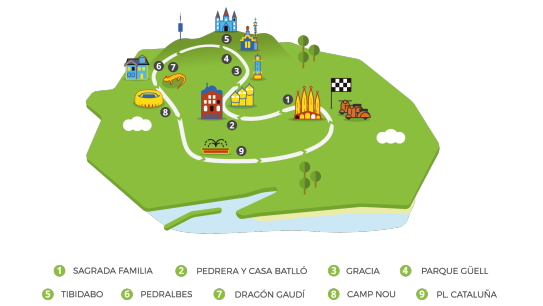 Which is the best beach in Barcelona? If the sea and its horizon are an inspiration for you, then let our brightly colored Vespa guide you through 8 km of beaches, green spaces and futuristic places. Vesping is much more than a Barcelona scooter rental: it’s a simple and immersive experience to experience the Catalan city in depth. From Parc de la Cuitadela to Mar Bella Beach, with this gps self guided tour you will realise that no other city is as multi-faceted as Barcelona! 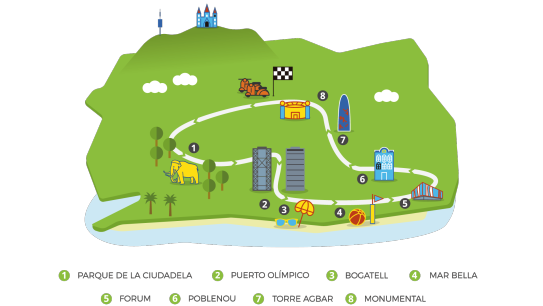 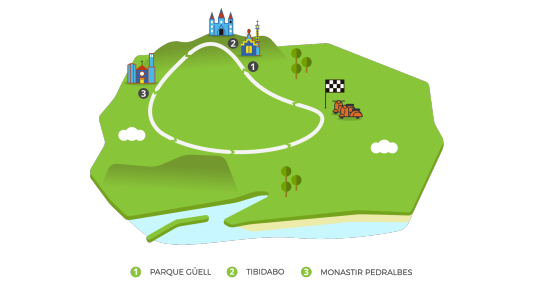 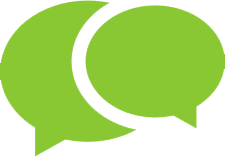 We had a ball! The Casper made our time in Barcelona so unique and special. We were able to see so much. The staff member who served us was amazing and had fantastic knowledge of the city.

THE BEST way to see Barcelona

As a newbie in Barcelona, I spent a good chunk of time looking for things to do on a quiet Saturday. You know the drill - tourist busses, trains, tours, etc. Then I stumbled on Vesping and WOW. Just WOW. Vittorio (the owner) is extremely knowledge about the city, and gave me and my Dad tips on the best bars, beaches, restaurants, etc, in addition to 4 pre-loaded GPS tours that together covered the whole city. Needless to say the 6-hour rental flew by and we both finished wishing we had more time! 10/10 would recommend this place in a heartbeat. Do yourself a favor and live like a local - seeing Barcelona from a Vespa!

Great customer service, and very good in advising about what to see in Barcelona. The clerk in the office suggested some cool places to see, and some great fish restaurant, and it was really everything he promised. :)

The Best of Barcelona Local Style

HIGHLY RECOMMENDED! Booked online and rode the Vespa for a day and a half. We were able to cover most of Barcelona's best spots because of Vesping's pre-loaded itineraries. Vittorio was able to explain well how to take full advantage with very detailed notes on the map. What made it extra special was the trip to very good restaurants in different parts of the city. Great view, great food, great ride! I hope the photos below do justice to the type of adventure this thing will bring you. Thank you Vittorio and Vesping!

Great experience!! We booked this online and brought our international driving permits that we bought in the US before leaving. Easy to find location, near the Sangrada Familia. Staff was so kind and very helpful explaining the routes and the GPS. My husband drives a motorcycle so we were able to use the route up to Tibidabo. AMAZING!!!! We never would have gotten here without this day trip (we didn't have a car and it would have been an expensive Uber). Best views, best photos, great adventure!!! Thank you so much for experience!

We had a really great time in Barcelona with Vesping on our teambuilding activity with our Belgian IT company, hopefully we see each other again soon !

The vesping adventure is a must have in Barcellona. Vittorio was super Kind and gave us a lot of suggestions to better enjoy the city. The vespa are fully furnished, with helmet and GPS and allowed us to enjoy Barcellona at 100%. Super suggested. If u want to live Barcellona u ve to use vesping service!

Vesping MADE our trip to Barcelona

Riding vespas through Barcelona is definitely one of the coolest things I've ever done. We got to see and do everything we wanted to (which was pretty much the entire city), and we did it at our own pace. This was an awesome way to really experience the city, and it was way more convenient than any tour bus would have been. Vesping's guided GPS tours made it very easy to see all of the major attractions, but we did have a few problems with the GPS telling us to go down one-way streets in the wrong direction. We had a total of 5 vespas in our group with drivers of varying experience levels, and the traffic was much less crazy than other European cities we've visited. We didn't have any major issues, but I would recommend looking up the traffic rules on roundabouts, as they are much different than here in the U.S. This was an amazing experience, and using Vesping has changed the way I want to explore new cities.

Excellent way to see the region!

My only regret is not remembering the name of the man who greeted us and set us up, he was incredibly helpful and his hand-annotated map is something I will put on the wall to remind us of our time here. We were firstly advised that I required an International Driver's Permit to legally operate the scooter (I have a motorcycle licence for New Zealand), and without the IDP I could face penalties from the police if stopped. The IDP cannot be acquired in Barcelona so the risk was up to me to carry on with the rental or not and we decided to go ahead with it. Next we were shown a map of the area and the places to go were highlighted, this corresponded to the tours on the GPS unit which made planning our trips very easy. We were given inside knowledge of the different regions of the city, specifically areas that weren't part of the tourist trap and where we could experience real Barcelona food at better pricing. We were offered the option of extending the rental for a reduced daily rate which would have been very tempting if we hadn't already bought a metro pass. The vehicle operated flawlessly, the 300cc scooter had no problems getting myself and the wife around. Muchas gracias señor.

An Excellent way to see and feel the city

Outstanding service~ we were greeted warmly and briefed in detail of what to do, where to go, where to eat (and where not to). We upgraded to a 125cc Scooter, which in hindsight is essential for the steep hill climbs. As a regular scooter user, some of the hills and dips were quite exhilarating...I could not have done this without experience! The GPS tours were easy to follow, with plenty of stops and took interesting and varied routes. We managed to do 3 tours in 24 hours~ the Tipidabo tour to the heights of the hills to take in some magnificent views, The Olympic tour which took us all-around Montjuic and the surrounds and The Beach tour....but being February, it was dark at this point. We enjoyed a recommended Paella stop and some drinks with great views. Barcelona has many many scooters...it was fabulous to ride alongside :)

My colleagues and I rented the 150cc's with GPS for 2-days on the weekend. The guys in the shop did a great job of explaining where we should go, the various tours available in the GPS and how to navigate the streets of Barcelona.We all have had previous riding experience and I would not recommend this for inexperienced drivers. There are a lot of roundabouts in the city and they can get a pick tricky so pay attention when you are driving. The Vespa's were great, plenty of power, lot's of storage for your helmet and if you do some shopping. Would certainly rent from them again next time we are in Barcelona.