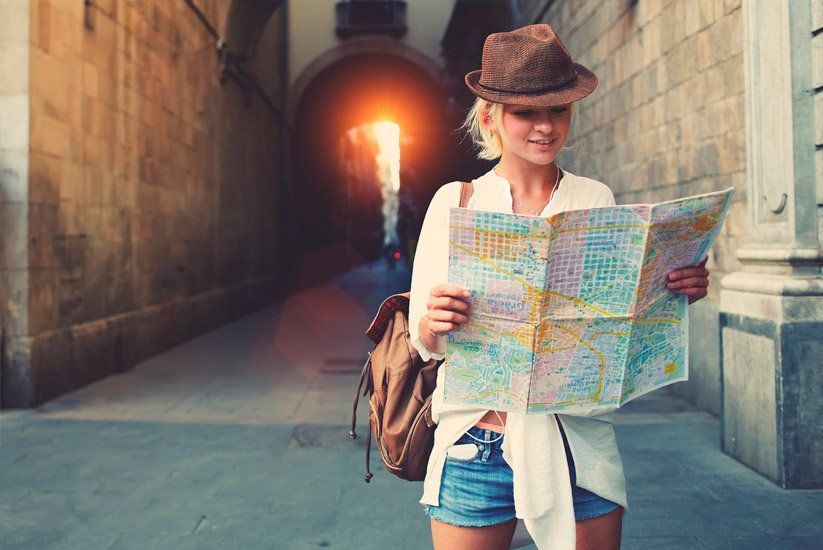 The â€śCiutat Vellaâ€ť (Old Town) with its 450 hectares territory and a population of over 113.000 inhabitants was the first district of Barcelona.
Famous for its narrow streets, the old city was walled up in 1859 and is now the central area of the Catalan capital. Just look at the map of Barcelona and you will notice that the city has chequered streets, except for this area where the streets look more like a maze.
Ciutat Vella is divided in four picturesque â€śbarriosâ€ť: El Raval on the left, formerly popular and rural, with Las Ramblas which separates it from El GĂłtic. In the center, this latter is the oldest living center of Barcelona. On the right, El Born, with the Sant Pere, Santa Caterina y La Ribera areas, the Medieval extension of the city. Finally, the youngest district: La Barceloneta, close to the sea.
You can visit this area with Vesping following our GaudĂ­ Tour or Olimpic Tour have a look!

El Raval is the most controversial Barcelona district, but also the most interesting.

If you like authentical and cosmopolitan areas, this is for you. Overcrowded, full of bars and theatres, with narrow and winding streets, this district was named â€śBarrio Chinoâ€ť (chinese district) during the 30â€™s. Located near the port, it was also known as the â€śred light districtâ€ť. During the 80â€™s, the Catalan Government aimed at modernizing and securing El Raval, deciding to launch an urban project of housing rehabilitation and opening new spaces and facilities for the community. Even if this project improved the district image and living conditions, there are still unsafe places within El Raval, with prostitution and drug traffic.

However, this area is a real cultural center, full of workshops, galleries, hosting the MACBA, CCCB, the â€śMaritim Museumâ€ť and the Liceu Opera House.

You can also find good typical restaurants in this area, have a look at our “Eat Parade” section!

Is Barcelonaâ€™s iconic street, spreading itself along the Roman wallâ€™s line. Walk on this pedestrian street lined with trees, enjoy the smell of the flowers while having your portrait drawn by street artists.

El GĂłtic is the hearth of the old town and the oldest Barcelonaâ€™s district. Located between Las Ramblas and VĂ­a Laietana, it stands on the old Roman village.

It is composed of different historical zones that have kept their proper identity: El Call, Sant Just i Pastori, Santa Anna, la MercĂ¨. Admire the basilica of Santa Maria del Pi on PlaĂ§a del Pi with its cloistre full of vegetation, walk down the shopping Avenida Portal de lâ€™Angel to PlaĂ§a de la Seu, a charming place from where you can observe Santa Eulalia Cathedral.

You shoudnâ€™t miss the Palau Reial Major that hosts the Barcelona History Museum, as well as the Augustus Temple.

On night, El GĂłtic donâ€™t sleep and you will easily find a place to have a drink and dance.Have a break on PlaĂ§a Reial, lovely place surrounded by arches housing restaurants and cafĂ©.

Mix of old and modern buildings, labyrinth of narrow streets and places, full of cafe, this neighbourhood is full of surprise!

Formerly a place of jousts, public executions and processes for witchcraft, El Born boomed from the 13th century on thanks to commercial roads. The construction of the church of Santa Maria del Mar unified the place divided between Sant Pere, Santa Caterina (which still maintains medieval features) and La Ribera, bringing peace and quietness.

Of course, you shoudnâ€™t miss the Picasso Museum on Calle Montcada or the Catalan Music Palace.

Are your travelling with your in family? Pop in and see the zoo of the Ciutadella Park (the green area of the neighbourhood) or recover your strengths in the Barcelonaâ€™s chocolate factory tasting the best Catalan chocolates!

Nowadays, offering a mix of medieval and modern buildings, El Born is the main area for fashion and art in Barcelona. A part of being a famous place for shopping, it is perfect for night life! It overflows with bars, cafĂ© and restaurants for all tastes and budgets.

La Barceloneta is a triangular zone right next to the port measuring 71 hectares, built on lands reclaimed from the sea and was once a fishermanâ€™s area. Nowadays, if you leave the crowded beaches and go for a walk in the streets of La Barceloneta you can spot traces of the old life such as woman chatting from a balcony to another over a little street, or old men sitting in front of their house.

Barceloneta beach is the main attraction of the area, always full of tourists in summer. It attracts of course every kind of sellers: agua, ice-cream, donuts, massage, even tatoos… Please pay attention to pickpockets in this area and also on the beach!

If you walk along the beach you will run into â€ś chiringuitosâ€ť, bars located on the beach, with music and food stands. Numerous restaurants stand on the seafront, offering a marvellous view of the sea. But if you want to eat quality seafood, before heading to the Barceloneta, read our “Eat Parade” to avoid bad surprises!

If you are travelling with kids, take them to admire sharks at the Barcelonaâ€™s Aquarium, they will love it!